Human Embryology in the Holy Qur’an 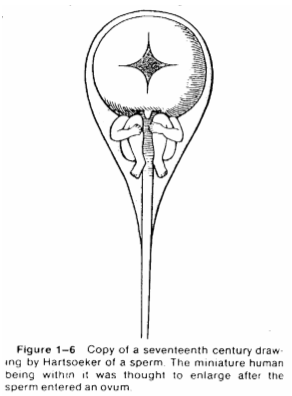 Human beings have always been interested in how they developed before birth. As far as we know, Aristotle wrote the first book on embryology in 4 B.C. promoting the incorrect notion that the human embryo developed from a formless mass that resulted from the union of semen with menstrual blood.

It was not until the close of the 17th Century when the microscope was discovered that the early stages of human development could be effectively studied. A popular idea in the 17th Century among scientists was that the sperm contained a miniature human being that simply enlarged inside the sperm. Another equally strong idea was that the ovum contained a miniature human being that was stimulated to grow by the semen. It was not until the 18th Century that Spallanzani showed experimentally that both male and female secretions were essential for initiation of development. Using the microscope to examine cells, it was reasoned in the 18th Century that development resulted from growth and differentiation of embryonic cells.

The scientific accuracy of the statement made by the Holy Qur’an in the 7th Century A.D. is remarkable. The concordance between modern science and the Qur’anic verses is particularly striking when compared with the mistaken beliefs and notions current at the time of the revelation of the Qur’an in 7th Century A.D. It was impossible for an illiterate man (as the Holy Prophet was), living in 7th Century A.D. to have provided such astonishing and precise details on this issue. There is nothing to indicate that, at that time men in the Middle East and Arabia knew anything more about this subject than men living in Europe or anywhere else. In fact, these verses were at the centre of a squabble later on, between Muslim religious scholars on one side, and the scientists on the other, who had begun to question the validity of the Qur’anic verses. In the light of current knowledge, there is no room for such squabbles.

A human being develops from a single cell, the ‘zygote’, which forms when an ovum is fertilised by a sperm. Two verses from the Holy Qur’an make it very clear that the sperms are derived from a very small part of the fluid or semen.

It is well established that only a few hundred of the several million sperms in the semen are able to pass through the uterus and surround the ovum (in the uterine tube),

The ‘mingled sperm-drop’ mentioned above, refers to the mixture of a small quantity of sperms with the occyte (and its associated follicular cells). There are other references in the Holy Qur’an to the origin of man from a small quantity of ‘mingled fluids’ which undoubtedly refers to the male and female secretions. The idea that development results from a genetic plan contained within the chromosomes of the zygote was not discovered until the end of the 19th Century. A verse from the Holy Qur’an clearly shows that the drop (in Arabic ‘Nutfa’) contains the blueprint for the future characteristics and features of the developing human beings:

The ‘three stages of darkness’ might refer to the 3 anatomical layers which afford protection to the embryo from external injury.