One objection being raised is that Hazrat Mirza Ghulam Ahmad may peace be upon him was confused, mad and made silly declarations, therefore they ridicule him for what he said.  For instance, they quote this passage, taking it literally, to show that he was crazy, a false prophet who made ridiculous statements:-

God named me Mary in the third volume of Braheen-e-Ahmadiyya (the book of ‘revelations’ written by Mirza).  I was nurtured for two years as Mary and was raised in a womanly seclusion.  Then, the spirit of Jesus was breath into me just as was done with Mary.  Hence, I was considered to be pregnant in a metaphorical manner.  After a period of several months, not exceeding ten, I was made Jesus out of Mary by the revelation embodied in the last part of the fourth volume of Braheen-e-Ahmadiyya; and thus, I became Jesus, son of Mary.  But, God did not inform me of this secret at that time.
Kashti-i-Nuh, Roohani Khazain, Vol. 19, P. 50

The actual translation of the passage from our books is as follows:- 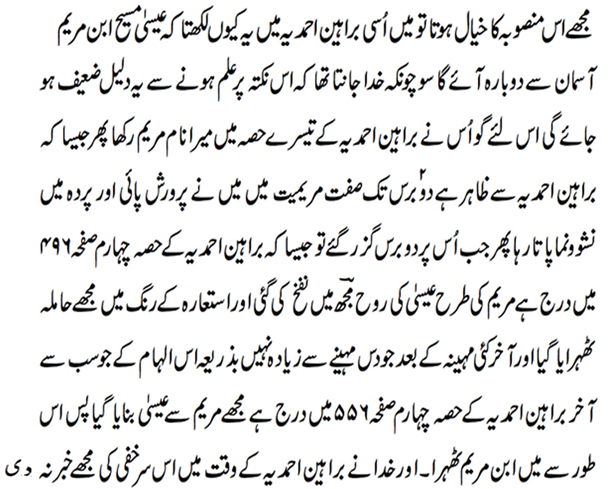 In the third part of Braheen e Ahmadiyya, God had named me Mary and as apparent from it, I was nurtured in the qualities of Mary for two years.  When a period of two years lapsed then, as stated on page 496 of the 4th volume of Braheen e Ahmadiyya, the soul of Jesus was infused in me as it was infused in Mary and, in an allegoric sense, I was stated to be pregnant.  Thereafter, after many months not exceeding a period of ten months after this revelation, I was, through a revelation recorded at the end of Braheen e Ahmadiyya on page 556, named Jesus and hence I came to be the son of Mary.
Kashti Nuh pg 46-47; Roohani Khazain vol 19, pg 50.

It is clear from the passage that this was in an allegoric or metaphoric sense, however you want to translate it.  Therefore the first thing we must understand is that he was not saying this was a reality, that ‘he really became Mary’ or that ‘the soul of Jesus really was infused into him’ or that ‘he really became pregnant’, these are just allegories or metaphors being used, to help us understand.

Hazrat Ahmad may peace be upon him then explains that after two years, he wrote Braheen e Ahmadiyya vol 4 in 1884, that Allah was now referring to him as Jesus, just as he had been referred to by Allah as Mary before.  All that he is referring to here is a spiritual rebirth, which he has described like a pregnancy, using an allegory.  Now it is a common way to liken one person to another through their similar qualities.  Just as the Holy Prophet may peace and blessings of Allah be upon him was liken by Hazrat Musa may peace be upon him as ‘a prophet like unto me’, that as Hazrat Musa may peace be upon him was a law-giving prophet who brought the Torah, so a prophet would come with similar qualities as him, i.e. another law-giving prophet – the Holy Prophet Muhammad may peace and blessings of Allah be upon him who brought the Holy Qur’an.  Likewise John the Baptist had the same spiritual qualities as Hazrat Elijah, to whom the Holy Bible relates that he was meant to have gone up into heaven on a chariot of fire and return to proclaim the coming of the Messiah.  This was fulfilled by John the Baptist, when Jesus came to him to be baptised and the dove appeared, meaning that John the Baptist had proclaimed the coming of the Messiah and not a prophet returning from heaven.

This understanding, that Hazrat Ahmad may peace be upon him was the spiritual coming of Isa ibn Maryam and not that Jesus son of Mary was going to return physically from heaven, took a long time to understand and a lot of research, but he then publically announced that Jesus was dead and will not be returning from heaven, instead he had come as a spiritual return of Jesus, son of Mary.